In South Sudan, Vaccines Are Overshadowed by Pressing Needs

Much of South Sudan is under water from flooding induced by climate change and deforestation. Crops and livestock are lost, hunger and malaria are spreading. With so many worries, coronavirus vaccines are a tough sell.,

Amour Abach, 16, wears a mask for the first time after a UNICEF team in South Sudan distributed them at a school in Dhiam Dhiam that is housing children displaced by the floods.Credit…

By Photographs and Text by Lynsey Addario

The vaccination campaign team from UNICEF arrived in a small motorboat last month in the flooded village of Wernyol, not far from the capital of South Sudan, and met with elders under a tree on a small patch of dry land.

The team ran point by point through a briefing sheet of facts about coronavirus and the vaccine, hoping to pre-empt what they assumed would be a flurry of questions from the elders about the shot and its side effects.

But first and foremost, what the elders wanted to know was: when will the rains stop?

In recent years, it has sometimes felt as if rain is the only thing some South Sudanese have ever known. The result is the worst flooding in parts of South Sudan in six decades, affecting about a third of the country.

For most of the 11 million people in this landlocked nation in east central Africa, one of the poorest countries on Earth, the coronavirus pandemic is not at the top of the list of problems.

Many people have fled Wernyol and other villages in the state of Jonglei, while those who remain have lost their crops, their livestock and their homes. With fish almost the only food available, malnutrition is rampant, as is disease.

In Pawel, another submerged village a few hours down a river that only a few years ago was a road, the village leader, James Kuir Bior, 50, was a little skeptical with the U.N. representatives about how the coronavirus vaccine stacked up against all the village’s other needs.

“We need medicines and nets,” Mr. Bior said as a thin covering of clouds overhead hinted at still more rain. “Now all we can think about is how to get out of this flooding.”

Villagers recognize the pandemic as a threat. Just perhaps not a very pressing one.

“We heard people are dying,” Mr. Bior said, “but we haven’t seen anyone sick here.” And besides, he said, “When you are starving, you don’t think about other things — you need to feed your stomach first.”

In any case, the question of vaccines was moot for these villages until the floodwaters receded. The nearest airstrip was submerged under several feet of water, so the shipment of Johnson & Johnson shots intended for the area was stuck in Juba, the capital. The airstrip finally reopened in mid-November, and vaccination is scheduled to begin on Friday, Nov. 26. 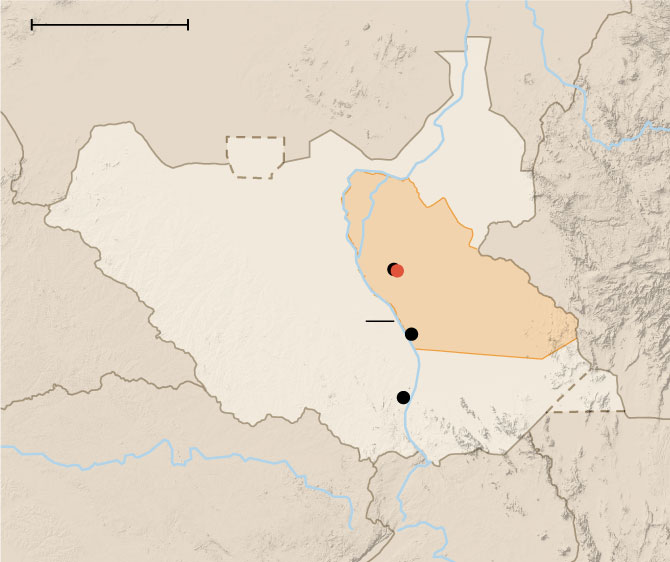 South Sudan, the world’s newest nation, was born in hardship and plenty of hope, but little seems to have changed since the day in 2011 that its people voted to secede from Sudan. The decade since has been one of political conflict and humanitarian crises.

Last month, I spent almost a week traveling with a U.N. team assessing the flood damage and preparing for the vaccine rollout in the region, much of it accessible these days only by canoe and small motorboat.

In Pawel, roughly a dozen men met to discuss the imminent arrival of the vaccine, the elders listening semi-attentively as a team from the U.N. relief agency led by Dau Deng, 41, filled them in. The young men nearby played chess, even less interested, as the temperature hovered near 100 degrees.

It was like that in many of the places we went.

A virus born half a world away, even one that has killed millions of people, could not compete with the threat lapping at their homes.

David Ayiik Deng Riak, a projects officer with Community in Need Aid, a local organization, said disease was no stranger to the region. “Malaria is the leading parasitic disease in this area,” he said, “followed by respiratory infection, and then of course, parasitic worms.”

The flooding has made everything still worse. It is now common to see people wading to hospitals with waterborne illnesses like dysentery, giardia, hepatitis and schistosomiasis. “Because people are staying in the water for the whole day,” Mr. Riak said.

Although testing is scarce, there is a little evidence that South Sudan has a major Covid problem.

“What the children are dying from is malaria, diarrheal diseases, respiratory infections,” said Yves Willemot, a UNICEF communications officer. “We have one child out of 10 that dies before the age of 5, and they don’t die from COVID-19,” he said.

South Sudan is currently administering some 152,000 doses of the Johnson & Johnson vaccine donated from the United States through COVAX, the global distribution program. It is the third batch of vaccines the country has received, and the ministry of health, backed by various U.N. agencies, is training vaccinators and grappling with the logistical hurdles of distribution.

When the first batch of vaccines arrived in South Sudan in March, there was so little capacity to distribute it that the government decided to donate half of it to neighboring Kenya so it wouldn’t go to waste. A second batch of the AstraZeneca-University of Oxford vaccine arrived on Aug. 31, but was due to expire only a month later. Despite the tight window, officials say, all of it was used.

Now a third batch is in the country, this time the Johnson & Johnson vaccine, which requires only one shot instead of two.

The vaccine is not the only thing to have made it to South Sudan. So have some of the unfounded rumors about it that circulate in many parts of the world. In Pawel, one village elder raised one of the concerns directly.

“Will we be able to do our duties as men?” asked John Majak Deu, 58, as some of the young chess players finally looked up, and giggled. “We were told by some of our sons, these people in the United States, that this vaccine is not good. It will cause infertility.”

The U.N. workers assured him that infertility is not a side effect of the vaccine.

But there seems to be less hesitation in other areas.

In South Sudan’s capital, Juba, there was a steady stream of people at vaccination sites across the city in October.

At one site, the Gurey Primary Health Care Centre, Johnson Gaga, 22, had little use for rumors around his neighborhood that the vaccine spreads to the liver and causes death within a year. He wanted his shot so that he could continue studying abroad, in Uganda.

With Scant Information on Omicron, Biden Turned to Travel Ban to Buy Time