The Fisherwomen, Chevron and the Leaking Pipe

Big Oil has a filthy legacy in the Niger Delta region of Nigeria. One prominent environmentalist said: “They are moving out and leaving all the mess behind.”,

While out fishing with some other women one day, Onitsha Joseph saw oil bubbling to the river’s surface, and knew they had found the source of the spill.Credit…

GBARAMATU, Nigeria — When the tide rose under the rickety wooden house-on-stilts of Onitsha Joseph, a fisherwoman who lives above the twisting rivers of the Niger Delta in southern Nigeria, it brought a slick of crude oil.

Before long, she saw dead fish floating on oil inches thick, and fishing — her livelihood — became impossible. The fumes were so strong at one point that Ms. Joseph fainted. She was rushed to the hospital on a speedboat.

At first, she had no idea where it was coming from. Then, out with some other fisherwomen one day in February, she said they spotted something bubbling up to the river’s surface. Ms. Joseph steered her oil-blackened canoe closer.

Far below her snaked a pipe. The American oil giant Chevron laid that pipe 46 years before, according to many neighbors of Ms. Joseph who were there at the time, and now, they said, it was leaking.

So began a battle between Chevron and hundreds of fisherwomen in the Niger Delta. Chevron denies that oil was spilling from its pipes. But the women insisted that this was just another instance of oil companies refusing to take responsibility, and decided to take the fight to the oil company’s doors.

“You want to kill us with your oil,” Ms. Joseph said, growing emotional. “We’ll come to you so you can kill us yourselves. In person.”

Oil companies like Chevron, Shell and Eni have made billions in profits in the vast Niger Delta region in the last decades. But now some are pulling out — and they are leaving utter ruin in their wake, according to government monitors and environmental and human rights organizations. The delicate ecosystem of the Niger Delta, once teeming with plant and animal life, is today one of the most polluted places on the planet.

It is the women, who do most of the fishing in the creeks and marshes in this part of the Niger Delta, who are trying to call the oil companies to account.

When they found the ominous bubbling, the fisherwomen alerted local leaders, who informed Chevron’s Nigerian subsidiary. At first, Chevron ignored them, the local leaders said, and oil continued to flow through the line.

Soon, black oil stained the roots of the mangroves — saltwater-loving trees that act as nurseries for fish and shellfish.

The fisherwomen decided it was time to occupy Chevron.

Hundreds of women from 18 communities, including Ms. Joseph, arrived at three Chevron facilities on March 26. There were new mothers with babies on their backs, and great-grandmothers in their 80s. In this riverine world, some zoomed in on speedboats. Others paddled to fortresslike flow stations on hand-carved canoes.

They climbed up Chevron’s ladders.

They scaled Chevron’s wire fences, dropping down on the other side.

Then they settled in to wait.

They vowed to occupy the facilities until Chevron did a proper investigation into the spill’s cause.

Years of living with oil pollution made them resolute. Nigerian government agencies have counted tens of thousands of oil spills from many sources in the Niger Delta in the past 15 years — though data on spills varies widely. Tens of millions of barrels were spilled since production started in the 1950s, a 2011 study said — quadruple the volume spilled in the 2010 Gulf of Mexico disaster.

For years, the women had felt cheated by Chevron, the dominant oil company in their immediate area. Their villages were poor. Houses of zinc and wood barely kept out the elements. Bathrooms were flimsy shacks over the river.

By contrast, the Chevron facilities they were occupying were like small cities. They even produced electricity, though they didn’t share it.

“From here to Chevron, it’s less than two miles. If they weren’t wicked, they’d have brought electricity here,” said Akasaere Mila, an 82-year-old community elder in Kokodiagbene, a village near the spill site. “Chevron’s a very rich company, but they’re very wicked to us.” 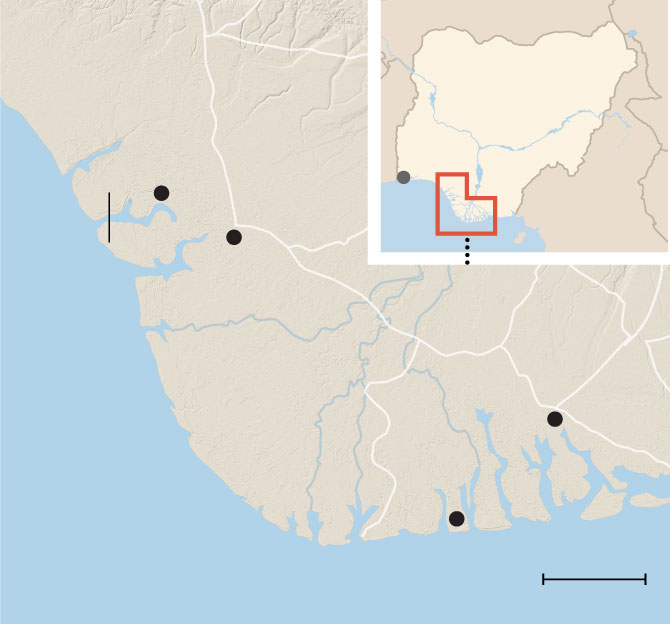 Once, Mrs. Mila visited Chevron’s office in Warri, a city several hours away by boat. It is a low, unremarkable office block — but to Mrs. Mila, it seemed the height of luxury.

“It’s a very fantastic building, with air conditioning, light 24 hours a day,” she said. “Water comes out of the faucet. You don’t have to go out to buy food, they have it right there. And they’re getting the money for that from this place.”

A Protest With Results

This wasn’t the first time a mass-scale all-women protest had shut down company infrastructure and caused a commotion.

In 2017, over 100 miles southeast of Gbaramatu, across a vast tangle of mangroves and rivers, the women of Belema protested against Shell. After years of underdevelopment and unemployment, they wanted Shell to hand over its oil field to a local businessman, Tein Jack-Rich.

The women there did not get rich. But before Covid-19, Mr. Jack-Rich employed over 1,000 local people, awarded scholarships and built roads and wells, said Anabs Sara-Igbe, a prominent chief, asserting that the investment in the community “far exceeds what we have seen from Shell and Chevron throughout all the years they’ve operated.”

Those years may be drawing to a close.

The world is moving on from fossil fuels. After decades of extraction, major oil companies are gradually leaving the Niger Delta altogether or going offshore — but, environmentalists said, often without decommissioning their aging infrastructure, which is done to restore the environment and prevent pollutants from leaching.

“They are moving out and leaving all the mess behind,” said Celestine AkpoBari, a prominent environmentalist. “They are happy to sell the liability to whoever wants to buy, and run away.”

The fisherwomen didn’t want Chevron out. They could barely imagine life without Chevron. The company extracts oil in partnership with Nigeria’s federal government, which is heavily dependent on oil revenue. The government and the oil companies were seen as almost synonymous — sometimes benevolent, sometimes malevolent — doling out crumbs of the national cake, or not. But not something that could be gotten rid of.

The women just wanted the company to stop the pipe from leaking, to investigate — which could lead to compensation — and some sacks of cassava or rice to tide them over until they could fish again.

At night at Chevron’s flow stations, the fisherwomen slept on hard metal walkways, plagued by mosquitoes. Occasionally, they paddled home to change clothes. Their lives were on pause.

Their impact was plain, though. Chevron says it shut off the flow of oil to its pipes in the area. The leak stopped, the women said.

After about 10 days, local male leaders asked them to leave. They said officials at Chevron had promised an investigation as soon as the women got out.

Their hopes raised, they got back on their boats, and left.

Ms. Joseph went back to her house-on-stilts, where the camp’s toddlers played in crude-slicked mud. She tried to clean her sticky nets.

Mostly, she sat on her deck, waiting for Chevron staff to arrive for the promised investigation.

Fumes seeped up through her floor. Helicopters buzzed over her head. She presumed they were Chevron’s. Every night, two local men were posted to stand guard on her decks, watching over the suspected site of the spill, in the distance. They were there because community members feared that Chevron would secretly repair the pipe, or worse, commission militants to blow it up so they could claim vandals or oil thieves had caused the spill. Environmental advocates say that oil companies are often accused of this in the region.

Ms. Joseph had no idea why the investigation was taking so long. But she heard of alarming things happening. First, all the members of a particular ethnic group, the Itsekiris, were thrown out of several villages down the creek.

Then, reports came that an Itsekiri village had been attacked, and a man killed. Villagers said the attackers were men from Ms. Joseph’s ethnic group, the Ijaws.

There had long been conflict between the Itsekiris and the Ijaws, some of it caused by British colonialists’ divide-and-rule tactics. But now they seemed to be heading for all-out war — and the catalyst was the elusive “joint investigation visit” into the spill — a process that is often problematic, with oil firms having undue influence on the outcome, but is the first step toward determining compensation.

Joint investigations are supposed to be conducted by the company, state regulators and community representatives. The question was, which communities?

At the biggest annual festival in Gbaramatu, women danced and genuflected before the king. On the sidelines, an Ijaw youth leader, Godswill Doubra, said of the Itsekiris, “If we want to kill, we can kill dozens.”

Two days later, in his quiet city home, Gabriel Yomere, an Itsekiri leader, threatened the Ijaws: “We are not going to rest on our oar and allow them to be slaughtering our people.”

The conflict was impeding the joint investigation and with it, the prospect of compensation. Both sides said that ultimately, others stood to gain from the dispute.

“Who benefits if the Ijaws and Itsekiris are in crisis and killing each other?” asked Godspower Benekama, the spokesman for Gbaramatu. “It’s Chevron.”

“When we have destroyed ourselves, they will come in and eat,” he said.

Both Chevron and Chevron Nigeria Limited, the firm’s local subsidiary, refused an interview. But a spokesman for Chevron said in a statement that no joint investigation visit had been done because of these community “disagreements.” Aerial surveillance it carried out showed that no spill had come from its facilities, it added. “So far, there has not been any indication that the oil sheen emanated from C.N.L.’s assets,” the statement read.

Women from the protest drifted back to their nets in mid-April. Their catches were pitiful.

“Before, I’d have fish up to here,” said Idukedoumeme Koko, her long net pulled halfway out of the water. She wrung it out. “Look at that black oil.”

“This is not enough to feed us,” said Deborah Emiko, looking at the day’s catch in her basket, worth about 50 cents.

They began to talk about returning to protest.

Ms. Joseph looked at the oil in the creases of her hands. She looked at the bags she once filled with crayfish to send to her children. They’d been empty for months. Compensation seemed a distant prospect. Some women bought frozen fish shipped in from Russia and the U.S. to eat, but she couldn’t afford that. Oil or no oil, she would have to go fishing.

Picking up her paddle, woolen hat slightly askew, she loaded stained nets into her canoe and headed out into the river.

Theoneste Bagosora, a Mastermind of Rwanda Genocide, Dies at 80

Wole Soyinka Is Not Going Anywhere

Thousands of Boko Haram Members Surrendered. They Moved In Next Door.